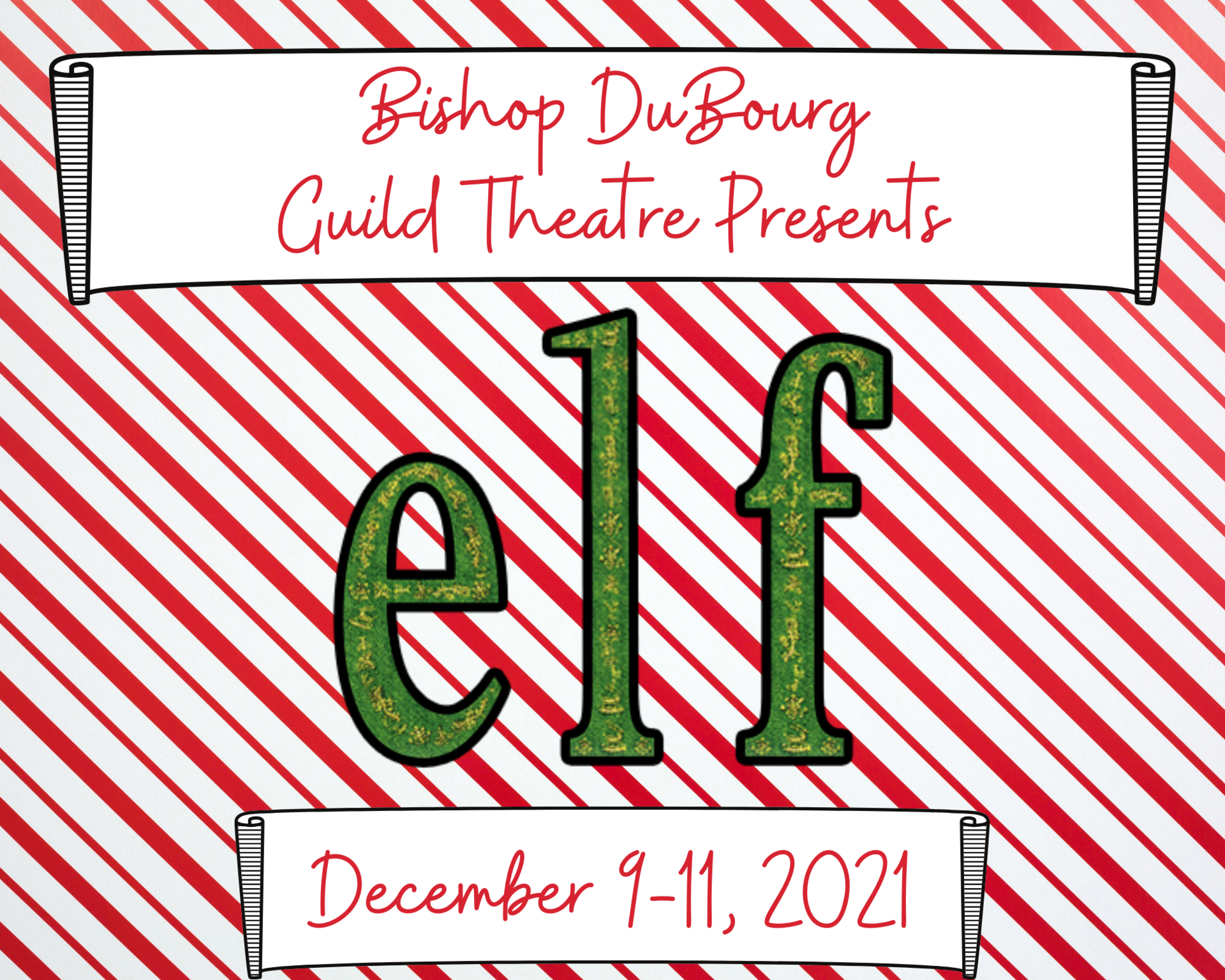 Purchase Tickets to the Guild Theatre's Production of ELF
Buddy Hobbs, a young orphan child, mistakenly crawls into Santa Claus' bag of gifts and is transported back to the North Pole.  After discovering the baby, Santa and his elves decide to raise the child as an elf.
Years later, Buddy finds out he that he's actually a human being and, at Santa's prompting, heads off to New York City in search of his father, Walter Hobbs.  Faced with the harsh reality that Walter is on the naughty list and his son, Michael, doesn't even believe in Santa, Buddy is determined to win over his birth family and help New York City remember the true meaning of Christmas.
To purchase in person tickets for a production - December 9-11, please email Kristi Walsh at kwalsh@bishopdubourg.org
Thursday, December 9th at 7:30pm
Friday, December 10th at 7:30pm
Saturday, December 11th at 1pm - Matinee
Saturday, December 11th at 7:30pm
Tickets are $6 for Grade School Children
Tickets are $8 for High School Students
Tickets are $10 for Adults
Virtual Tickets are $10  To Purchase Virtual Tickets Click Here

The award-winning Guild Players Theatre production group at Bishop DuBourg High School has a longstanding reputation for delivering stellar performances. Driven by talented casts, innovative set designs, and masterful lighting and sound design, the Guild strives mightily to provide its audiences with a quality evening of theatre, be it serious, comic, or musical. The Guild offers students the opportunity to be involved in a fall play and spring musical each year. From lighting and sound to costumes and make-up to dramatic, comic or musical performance, there is something for everyone!

Many talented actors, actresses, and musical greats have graced the stage at Bishop DuBourg and moved on to attain success on other stages, films, and soundtracks, including: Ken Page ’72, Norbert Leo Butz ’85, Marcy Weigert ’06, Justin Leibrecht ’06, Greg Schweizer ’73, Mary Beth (Scherr) Babcock ’85, Jerry Ahillen ’81, Joe DiMercurio ’80 and Bob Thibaut '00. It is a great place to let the magic of theatre enrich your life, now and forever.

INTRO TO ELEMENTS OF THEATRE Semester 1
Freshman - Sophomore Elective
This is a project-oriented class that studies all aspects of theatre. Students will gain a fundamental understanding of the art of the theatre and develop self-confidence in their abilities to work individually and collaboratively. Students will examine the history of theatre, experiment with technical elements such as set and costume design, and practice different kinds of performances such as pantomime, improv, and method acting. Students have the chance to create and perform their own play during the semester.

SKILLS OF SET BUILDING Semester 2
Junior - Senior Elective
Note: All students will be required to use OSHA (Occupational Safety & Health Administration) approved goggles.
This is a project-oriented class designed to develop and practice the skills used in designing, constructing, and painting theatrical scenery. Students will build and paint the scenery used in Bishop DuBourg’s spring musical as well as get a brief overview of costume, lighting, and sound design. Students who take this class should enjoy physical labor and work well with their peers. Prior experience with painting and/or construction work is welcome but not required. Students may take the course for additional semesters at a higher level.