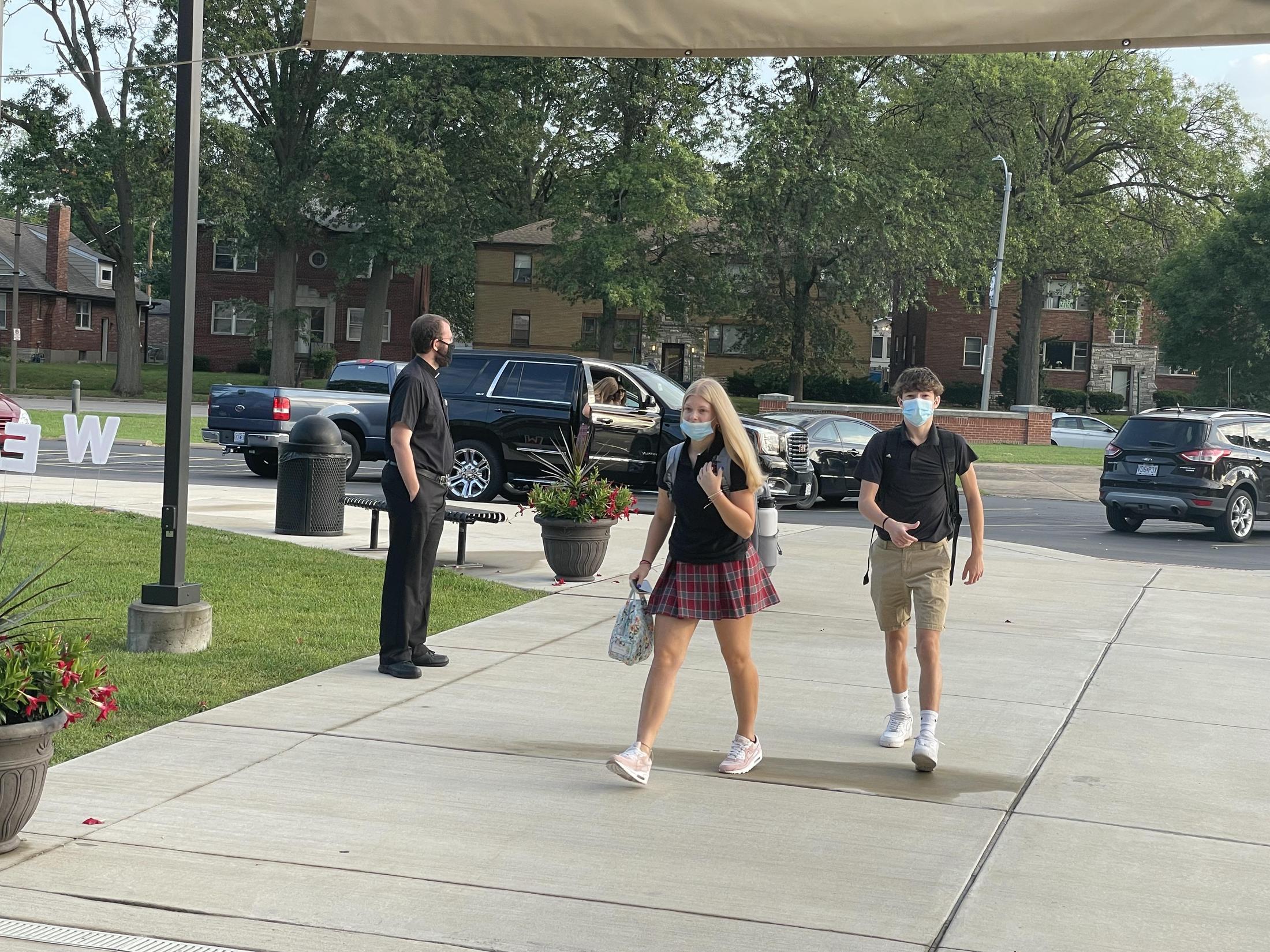 Bishop DuBourg High School came into being from plans conceived in 1949 by the newly-appointed superintendent of St Louis Archdiocesan High Schools, Reverend James T. Curtin. The plan called for a new high school to be built on a seventeen-acre tract of land at Clifton and Eichelberger, which had been purchased by the late Cardinal Glennon. In June of 1950, Cardinal Ritter (then Archbishop) announced the plans for the eighth archdiocesan high school, the largest in the system, to have an enrollment capacity of 1,600. Archbishop Ritter officiated at the groundbreaking ceremonies on May 18, 1952. Reverend Mother Borgia, then Superior General of the Sisters of the Most Precious Blood, who had been asked to take responsibility for the operation of the school, assisted him.

The new school, designed by architects, Joseph D. Murphy and Eugene J. Mackey, was designed as a “layer cake” building with the lowest floor hidden behind a fifteen-foot slope. The huge, three million-dollar structure was designed to be as aesthetic as possible within the limits of practicality and purpose. Classrooms were smaller in size to prevent over-crowdedness; glass bricks and overhead windows provided the brightness of natural lighting; “noise” areas were separated from classroom areas by buffer zones. The building was designed to accommodate a grade on each floor, with principals or coordinators in charge of each grade. The school would function as four schools within one building, thus allowing for a more personal relationship between the 1600 students and the floor director. Bishop DuBourg High School was an architectural marvel, highlighted in Architectural Digest as the example for a new generation of educational facilities. Bishop DuBourg High School provided the standard for many high schools built across the United States during the late 1950s through the 1970s.

Until the completion of the new school facility, classes were conducted in temporary quarters at Jefferson Barracks in Lemay. The school opened at Jefferson Barracks in September 1950, with ninety-six freshmen. Reverend John A. Shocklee and Sister M. Praxedes Schnitzmeyer, C.P.P.S., began as co-principals and continued as such for the first five years. For three and a half years, the sisters, diocesan priests, and lay teachers conducted classes in the barracks.

The following year the school accepted 145 freshmen. Over the first four years the freshman class grew from 96 students to 550 students in 1953. During the 1953 Christmas holidays, students and teachers moved to the top two floors of the new building. Instruction continued in the top two floors while construction was being completed on the first two floors. In May 1954, Bishop DuBourg High School celebrated its first graduation ceremony in the new school’s lobby.

The building was completed shortly after the beginning of the 1953-1954 school year. On September 12, 1954, Archbishop Ritter dedicated the new school. At the time of the dedication, it was already evident that the newly dedicated school would have to be enlarged. In October of 1955, work began on a twenty room annex that would increase the school’s capacity to 2,000 students.

Through the years many changes have been experienced in the student enrollment and faculty and administrative make-up. When the school opened in 1950, the entire staff consisted of one priest, three sisters, and one lay person. Among the charter members of the staff was Mr. Floyd Hacker, a coach and social studies and physical education teacher. Mr. Hacker, Bishop DuBourg’s first lay teacher, also served as the Bishop DuBourg High School’s first lay administrator from 1967 – 1992.

Student enrollment reached its peak in 1967 with a student enrollment of approximately 2,300. As the school grew, archdiocesan priests served as full-time teachers and parish priests served as part-time religion teachers. During this time period, the Bishop DuBourg faculty consisted of approximately forty priests, and fifty Sisters of the Most Precious Blood community located in O’Fallon, Missouri. A Sister of the Most Precious Blood held an administrative position from the founding of the school until the end of the 1982-1983 school year. The shortage of religious vocations resulted in more and more lay teachers replacing the sisters and priests. The sisters assumed responsibility for the school and through their hard work and dedication Bishop DuBourg High School became one of St. Louis’s premier high schools. Through the dedication of our founding religious, the impact of our current religious teachers, staff, and lay teachers dedicated to the mission of Catholic education, the Catholic mission of Bishop DuBourg has remained strong and continued to faithfully serve the Catholic educational mission of the Church.

A Cavalier was a knight from an area in France known as the “Old Provencal.” Bishop L.W.V. DuBourg (1766 – 1833) was a Frenchman who was the first bishop of the entire Louisiana Purchase which included New Orleans and St. Louis. He was bishop of this vast area – known then as “Louisiana and the Floridas” – from 1812–1826. Bishop DuBourg was an educator too, having been President of Georgetown College in Maryland and St. Mary’s College in Baltimore before becoming Bishop of Louisiana and the Floridas. Bishop DuBourg himself was courageous for his willingness to administer a frontier diocese such as the entire Louisiana Purchase in the early 19th century.

St. Louis, King of France, for whom the Archdiocese of St. Louis is named, lived from 1214–1270. He was a very just, generous and compassionate king and knight-crusader (or “cavalier” in French), establishing many hospitals, orphanages and social agencies in France.

In honor of their French patrons, Bishop DuBourg High School, situated in the St. Louis Archdiocese, fittingly declared their mascot to be the “Cavalier” in 1950, choosing that over the originally suggested "Knight." The original horseman was named TLGE, combining the letters of the names of the students who created him. He first appeared when a student, dressed as a Cavalier, rode horseback at a pep assembly in an effort to inspire the football team and the entire student body.