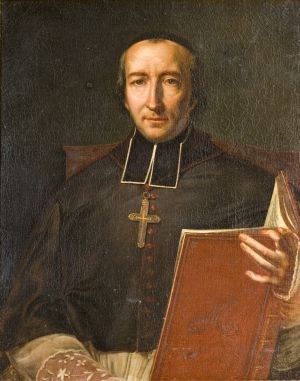 “Bishop DuBourg was in almost every regard an ideal Shepherd of Souls, of stately figure and manners, endowed with a voice clear as a bell, a frank open countenance, not without a touch of languor, as befitting his southern birth, at ease among the highest as well as the lowest, yet shrinking from intentional rudeness, because himself so perfect a gentleman, not strong-willed when he met opposition, but irresistible with those whom he knew to bear him good will, and above all a priest and bishop with the full realization of his high calling, such was the man who was sent to preside over the rising Church in the Mississippi Valley.”
(Rothensteiner, History of the Archdiocese of St. Louis, p. 268.)

Louis William Valentine DuBourg was born on February 4, 1766, on the island of Santo Domingo, the site of America’s first Holy Mass. At the age of two, he was placed under the guardianship of his grandparents in Bordeaux, France.  After completing his classical studies at the College of Guyenne in 1784, he studied theology in Paris.  On October 12, 1786 he entered the Seminary of St. Sulpice. Because of the troublesome times the records of the seminary were lost, so the date of Father DuBourg’s ordination is not known; however, other historical documents indicate that his ordination occurred during the fall of 1788.

On December 14, 1794, Father DuBourg sailed for Baltimore where he joined the American Sulpicians at St. Mary’s.  Records of the time show the young priest brought a tireless zeal for the spread of the Church into all his work. In Baltimore, he provided instructions to the Negroes, was appointed president to Georgetown College, and in 1803 opened a school for boys, which later became St. Mary’s College for American Boys. Father DuBourg gave his complete energy to finance the Baltimore Cathedral and was instrumental in selecting its imposing site. He served as advisor to Mother Seton and encouraged her in the founding of the Order of the Sisters of Charity.

In 1812, Louis DuBourg was appointed Bishop of New Orleans, but because of the captivity of Pius VII, the Pontifical letters of appointment were never issued.  While in Rome during September 1815, he was consecrated as Bishop. At the time of his appointment, his assigned diocese stretched from the Mississippi to the Rocky Mountains, from Canada to the Gulf of Mexico, and included Florida. Bishop DuBourg faced a gigantic task. For fifty thousand Catholics he had only fourteen loyal priests, many crippled by old age and worn with mission life. His challenges were compounded by the fact that many priests refused to accept his appointment as new Bishop of New Orleans.

Bishop DuBourg traveled to Europe to secure aid for his diocese.  He gathered missionaries and funds.  Upon returning to the United States, in order to avoid open rebellion in New Orleans, he established the St. Louis as the diocesan seat.  In the eleven years that Bishop DuBourg served the vast Midwest as Bishop, he accomplished much for the good of the Church. He proved himself a powerful and effective speaker. He worked to bring priests to settlers scattered in villages throughout the Valley. Bishop DuBourg brought to Florissant Jesuit missionaries, including Father DeSmet, to attend to the conversion of the Indians.  One of his first projects was to bring to the diocese the Vincentian fathers to establish a seminary in Perryville. Through his efforts, Mother Phillipine Duchesne and the Sacred Heart Sisters settled in the St. Louis Diocese. Bishop DuBourg also began a college which today is St. Louis University and established the first cathedral west of the Mississippi.

With the steady growth of the diocese, it became necessary to divide the area.  Accordingly, Bishop Rosati was appointed co-adjutor, assuming care of the more developed St. Louis Diocese.  Bishop DuBourg took his seat in New Orleans.  By this time, Bishop DuBourg was worn with much mission travel and found horseback riding difficult and the problems he faced in New Orleans were bewildering.  The priests of the diocese were stationed in a great circle around St. Louis; leaving the New Orleans’ missions practically without priests.  After several attempts to transfer priests to lower Louisiana and to establish a seminary there, Bishop DuBourg met with opposition so strong that he found it impossible to continue work in the diocese. Feeling he had not long to live, he resigned his post and returned to France where he spent seven years as Bishop of Besancon.  Bishop DuBourg died as the Bishop of Besancon on December 12, 1833.