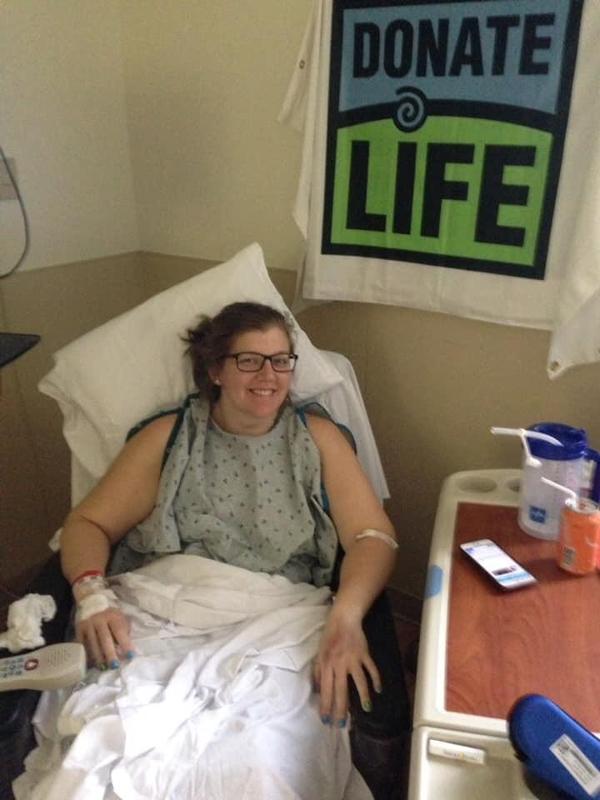 As featured in Cavalier Magazine 2019
In the wee hours of the morning on April 24, 2019, Colleen Echterhoff lay on her back in an operating room at BJC Hospital. At her request, Celine Dion’s “O Holy Night” played through the speakers. Colleen had been preparing for this for months. Tears rolled down her cheeks as she drifted off under the anesthetic—but they were tears of happiness and contentment.
On that day, Colleen, a 2010 graduate of Bishop DuBourg, became an altruistic kidney donor, which means that she donated one of her perfectly healthy kidneys to a complete stranger.
Colleen’s kidney donation journey started three years ago, when she began working as a unit secretary on the abdominal transplant floor at BJC.
“A couple times a week, I would see patients coming from the OR who had just donated a kidney,” Colleen said. “I thought these patients were larger than life, too cool to even talk to.”
About a year ago, Colleen transferred to the pre-kidney transplant team in the office, where she joined the group of people who evaluate potential living kidney donors. She answered phone calls from people interested in being evaluated for donation and from patients who just found out they were in need of a transplant. Kidney donation, and the real people who give and receive, were part of her day-to-day work life.
To help understand the process, she decided to sit in on a class for kidney recipients put on by a transplant coordinator.
“In the class, the coordinator clicked from slide to slide and mentioned several times how beneficial it is to receive a living kidney instead of a diseased kidney,” Colleen said. “I began filling out the paperwork that afternoon.”
Becoming a kidney donor involves an extensive screening process, which Colleen began in August 2018. She got the call that she had a match while she was on a cruise in late February.
All Colleen knew about her recipient was that she lived in Oklahoma City. Organ donation policy stipulates that recipients and donors can’t contact each other for six months after the surgery, and it must be mutually agreed upon. But Colleen didn’t mind not knowing the person who received her organ; she just knew that she was called to help.
“It seemed like a no-brainer to me,” she said. “If the extensive testing and brilliant transplant team determine that I can live a normal life with just one [kidney], then I needed to give the other away.”
Colleen’s faith plays an important role in her life, which further influenced her decision.
“The whole thing to me was ultimately a ‘What would Jesus do?’” she said. “Especially going in as an altruistic donor, I knew nothing about the person, but I knew they needed help and I am called to love them.”
Colleen took a month off work to recover after the surgery—a perk of working at BJC—and the first two weeks were difficult, she said. But, she recovered her strength and her body adjusted to having one kidney, and she says she felt completely normal by about four weeks post-operation. As she slowly worked back up to her usual busy, active lifestyle, she thought of her organ recipient.
“The average kidney patient is on dialysis three times a week for four hours each treatment,” she said. “Being able to play a part in giving someone their freedom of life back, or see their babies or grandbabies grow up, or work a regular job—that’s what was exciting to me.”
Now, as a living kidney donor, Colleen wants to be an an advocate for organ donation and an example of a regular person who’s living her life to the fullest after a donation.
“Organ donation is so, so needed,” she said. “I think it’s so important to be informed, and if you choose to be a registered organ donor, it’s even more important to have that conversation with your loved ones.”
Colleen feels completely normal, physically, and says that if it weren’t for her small scar, she wouldn’t know she only has one kidney. She’s just thankful—and proud—that she was able to give her other one away.
“It was a victory for me and the doctors and for the recipient and for Jesus,” she said.
Published September 19, 2019 Print